The radius you choose is very important because it represents the maximum distance from which you want to receive messages. 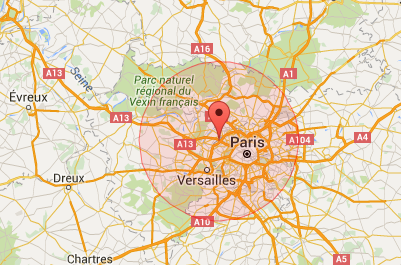 The radius is a circular area around you. Currently you can choose at will from 1 to 300 kms. There are some buttons with preset distances that appear when you press "Radius"

The radio can also be understood as the range of a radio transceiver, with the advantage that it is not affected by structures that stand or geographical features. It is always a perfect circle and its center is the point at which you are located.

When you experience for the first time with this concept of geolocation and radius you can see strange things like receiving messages from people who can not receive yours. Or vice versa, people who read to you while you can not read them.

Understanding this is very easy if you think you are the center of a circle that encompasses other users. But the circle of those other users can not reach you. Or vice versa. Here is an example: 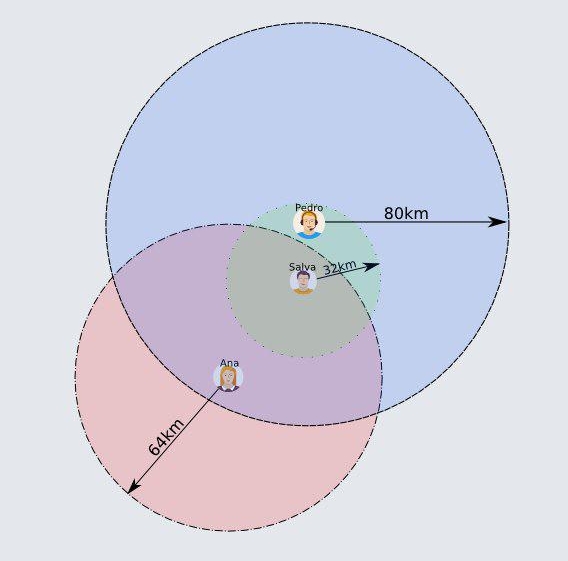 Pedro has a radius of 80 km within which are Ana and Salva. Therefore, Pedro receive messages from both.

Salva has a radius of 32 km within which Peter is, but not Ana. Salva may establish a two-way communication only with Peter as both can speak to each other .

Ana, meanwhile, has a radius of 64 km within which is just Salva. When Salva emits Ana receives but Salva (as his circle does not include Ana) does not receive what emits Ana.

Peter, however, has Ana included in his circle, so he can read her messages.

Now, Ana can not receive what emits Pedro because the circle of Ana does not include him

If you notice, in this example, Ana can not establish bidirectional communication with Peter and with Salva.

It may seem complicated, but it is exactly the same as if you used a transceiver radio with a certain range.

Possibly this animated image help you better understand this subject:

Of course, users can communicate with all people whose circles are included mutually. And those who have a shorter range (those who have set up a smaller radius that do not include you) will not receive what you emit. But this is one of the interesting peculiarities of Qwasap: you can hear on the radius that you want. Users who can not receive your messages are marked with a yellow triangle

Over time as more and more people use Qwasap you will prefer to have a smaller radius, confined to the city or area that interests you. The closer you're from other users, with more certainty you can communicate with them. Inevitably sometimes you will receive messages from remote users by its smaller radius, they can not read you.

But the mastery in the use of Qwasap is reached when you place yourself where you want and you tune your radio properly.

it's easy, it's simple, it's useful. If you understand this explanation you are already an expert.